After reviewing it, fixing it seemed like a straight forward change but I wanted to know, is enabling SMB signing on your NetApp a non-disruptive change?

Everything I’ve read says it has been supported since Windows 98 and if you’ve disabled SMBv1 (which you hopefully have) everyone should be using it anyway with SMBv2 and newer which signs by default. On top of that, Domain Controllers use signing by default for things like SysVol and I assume DFS if you have that on your Domain Controllers. Windows also negotiates whether or not to use SMB signing based on client/server settings and by default it prefers more the more secure use of signing unless someone is man-in-the-middling you and downgrading your connection or you’re using…. Windows 95?

Since I couldn’t find any kind of answer to my question I figured I’d post something to hopefully help the next person wondering the same thing and faced with this security alert.

So, is enabling SMB signing on your NetApp a non-disruptive change? He asked again, out loud, like a crazy person.

Long answer: Nope but it’s probably not that bad.

The 5% of clients that had a problem with SMB signing immediately lost access to all shares hosted on the NetApp and would get a “You do not have permissions to access this” error messages.

For remote workers it was easy, disconnect/reconnect your VPN and that solved it. On-premise workers had to logoff/on or reboot. Servers though, they had to be rebooted.

The kicker? Clients that had problems ranged from Windows 7 (I KNOW) to Windows 10. Servers that had problems? Server 2008 R2 (I KNOW) up to 2012 R2. Surprising none of our 2016 or 2019 servers had a problem but we have significantly less of those so plan accordingly if you’re doing this.

Here is an example: We had two identical 2012 R2 servers, one worked post change, one didn’t. We had to reboot one with the issue and then everything was good again.

My advice if you are tasked with implementing this in your organization?

For desktops: Ask your clients to logoff when they go for the day and make the change in the evening.

For servers: Had I been smarter I could have enabled SMB signing on Patch Tuesday right before server reboots. That would have caused the lease disruption and folded in nicely to our existing maintenance window. If that isn’t an option for you have a quick test plan to check if each server can access a share and if it can’t, reboot it.

There is potentially another option I was exploring but abandoned. You could build a GPO that makes SMB signing required and apply it to your Desktops/Servers ahead of time. After the GPO has propagated, in theory, you should be able to enable SMB signing on the NetApp and since all systems are already required to use it, there should be no disruption.

There you go. My lessons learned from this experience. Good luck. Hopefully this helps someone.

At long last, part 3 of my journey to try and cool my T340 with out having to listen to a hair dryer.

Here is part 1 and part 2 if you’re curious about what I’ve done so far.

I ended up getting a 3D Printer sometime after I wrote part 2 and one of the projects I had in mind was designing and printing a shroud that I could attach fan(s) to and slide over top of the heatsink in my T340 to create a better seal for airflow and get rid of the zap strap solution from part 2.

I was hoping that having a proper shroud would increase cooling efficiency, unfortunately I don’t think it did much for my overall temperatures BUT it did make it so my fan is now easily replaceable and just slides overtop the heatsink. More on that later (or just scroll to the bottom).

Here is what I came up with: 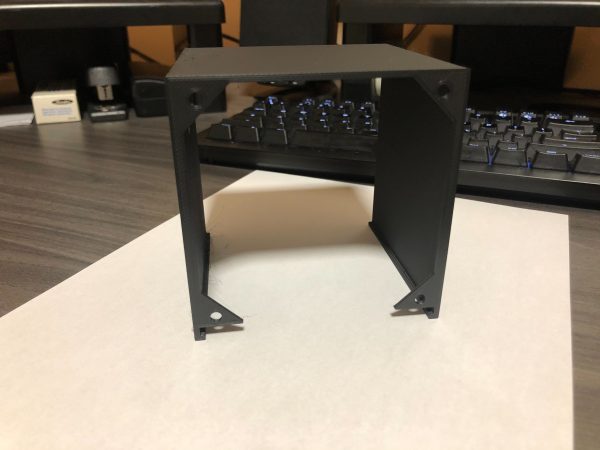 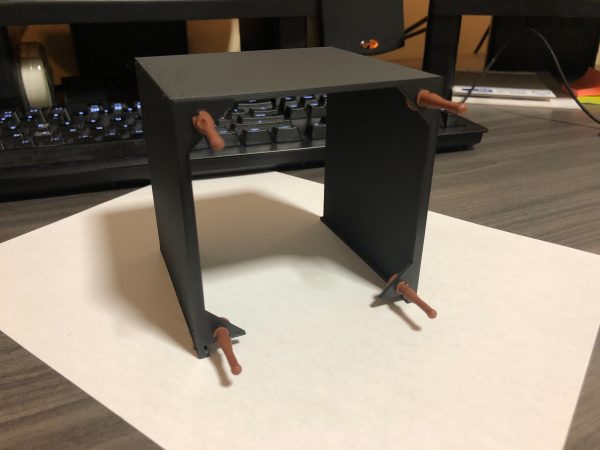 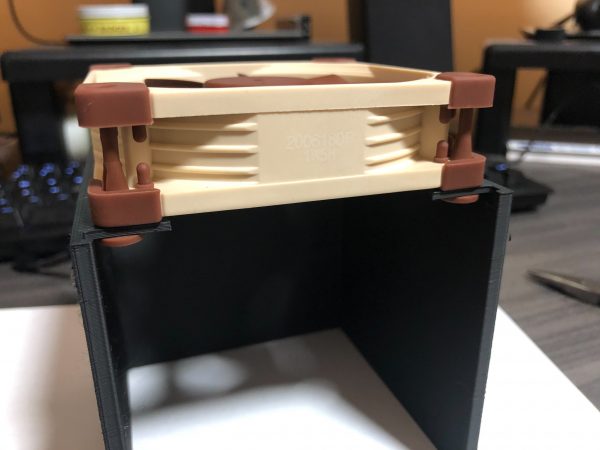 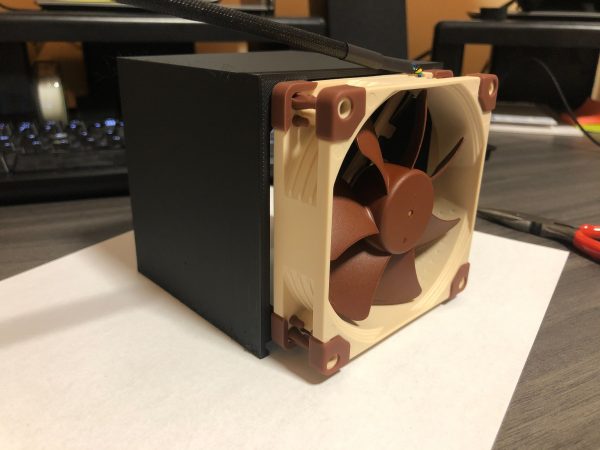 It’s hard to tell in the photos but there is a tiny lip at the bottom that snugly tucks over the base of the heatsink to prevent the whole shroud from just sliding off over time.

I used the rubber fan holders that Noctua includes with their fans and they fit very nicely in the holes. If you’re going to use a different fan I can’t guarantee the screw holes will hold up to standard case fan screws. A M4 screw and nut should work just fine though.

When mounting the fan be very careful. I printed at 0.3mm layer height and found that if I yanked too hard when installing/removing the rubber stoppers the layers would peel apart. This might be solved by printing at 0.2mm.

Here it is installed: 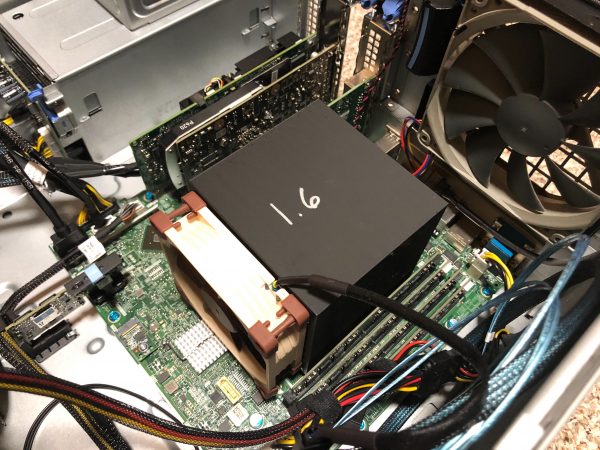 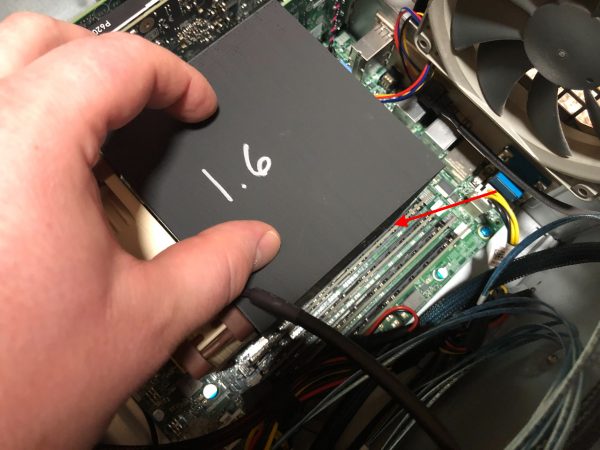 There is a tiny amount of clearance between the RAM and the shroud, to make installation easier I removed that stick of RAM 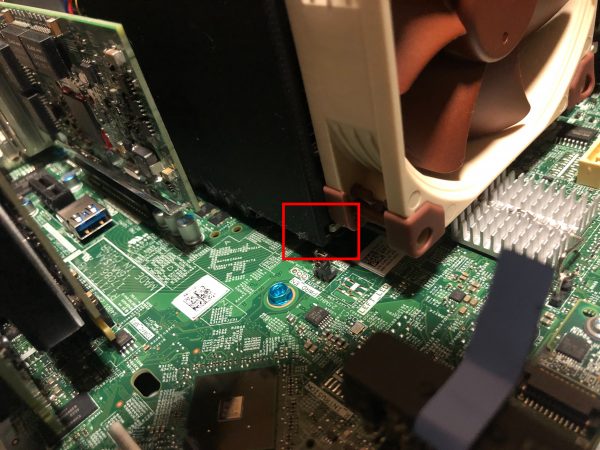 I used a Noctua NF-A9 PWM (92mm*92mm*25mm). I originally planned to buy two and set them up in a push/pull configuration but Amazon sold out. Turns out this was lucky for me because it appears Dells engineers left a really sweet hunk of plastic sticking up from the motherboard which prevents mounting a 25mm thick fan to the back of the shroud: 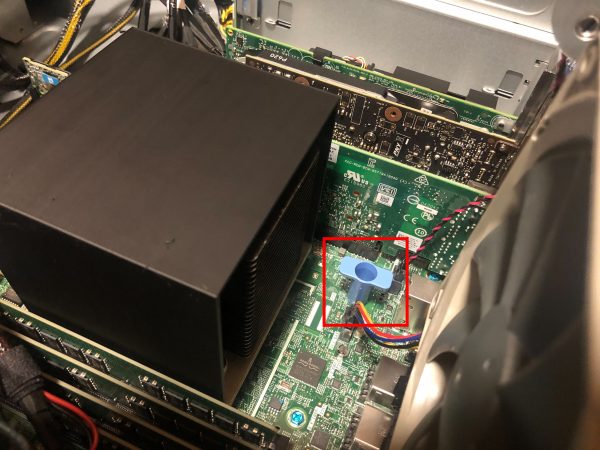 This prevents a 25mm deep fan from fitting properly

I see Noctua sells 92mm*92mm*14mm fans that might fit in there. If someone wants to donate two I will totally update the shroud design with two fan mounts and post an update. Based on my reading I don’t think a push/pull setup will benefit overall temperatures much though since this heatsink is pretty small and has a simple design.

Ok, what you probably care about, was there a performance improvement in cooling over my original zap strap design? Possibly.

I say possibly because I stupidly didn’t blow out my server of dust before starting all of this. I ended up blowing the dust out during some size checks but before installing the shroud. Here are my recorded temperatures:

All that being said, I’m happy with ~65c at peak load and I can’t hear a thing. Idle temps seem to be roughly the same.

You can also find it on Thingiverse.

I printed at 0.3mm. I’d recommend doing 0.2mm to hopefully make it a bit stronger so you don’t have to be as careful when installing the fan. 100% infill. You might also want to rotate the print so the fan screw holes are flat on the bed.

Alternatively you can skip ALL of this and try CJ’s suggestion he recently posted on my Part 1 which is a BIOS setting change.

Over the summer we build a Remote Desktop Gateway Cluster to provide remote access to workstations for some of our clients.

Right before go-live day we updated our RDP template we provide to clients and that’s when things started going wrong for only Mac users…. and only some Mac users.

I originally came cross this Technet thread when researching the issue: https://social.technet.microsoft.com/Forums/en-US/e0f8f58f-58c9-49fc-9d48-f6bfde830f17/rdweb-authentication-error-0x607?forum=winserverTS

Turns out that didn’t apply to us. The registry entries it mentioned did not exist on our servers.

We found that rolling back the Microsoft RDP Client to 1.13.8 (the latest 1.13.x build) would solve the problem.

On a whim one of our Techs still had a copy of our original RDP template we used for initial testing where everything worked and found that it still worked on Mac OS 10.15.6 with Microsoft RDP 1.14.0.

We cracked open the RDP file (it’s just text) to find what the difference was: 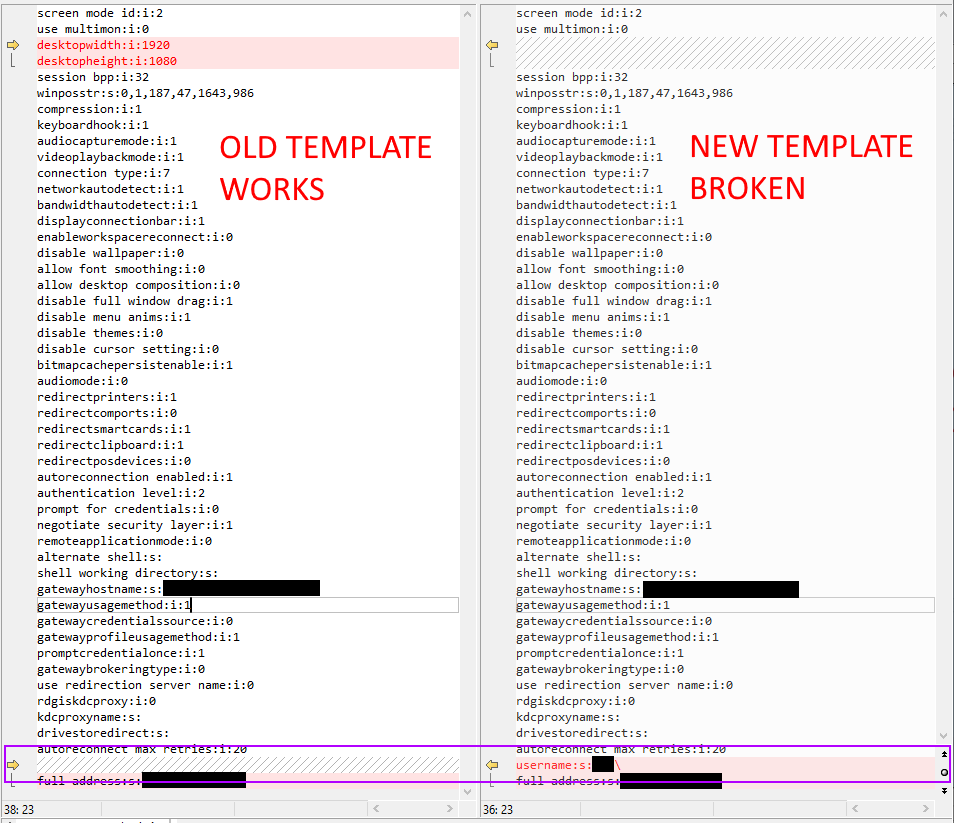 We had added the following line:

In an attempt to make it easier for clients to connect by auto-populating our domain name into the shortcut.

When we removed this line from our template the problem went away.

Just wanted to post my settings for this plugin to save others time. I took me a little bit before I found working settings by combing through multiple forums/comment sections.

I left everything else default and am able to load firmware without issue. 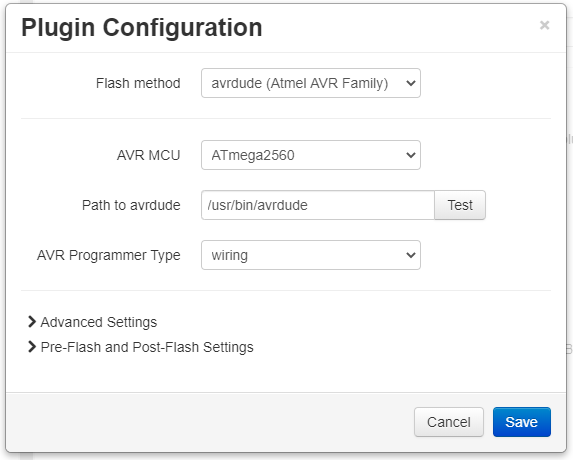 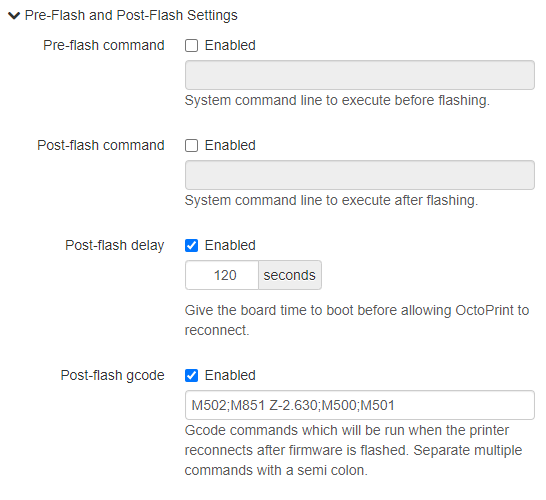 These gcodes do the following after a flash:

I’ve been wanting a 3D printer for a while and finally bought one. I ended up with a Creality CR-10 V3 based on a friends recommendation. 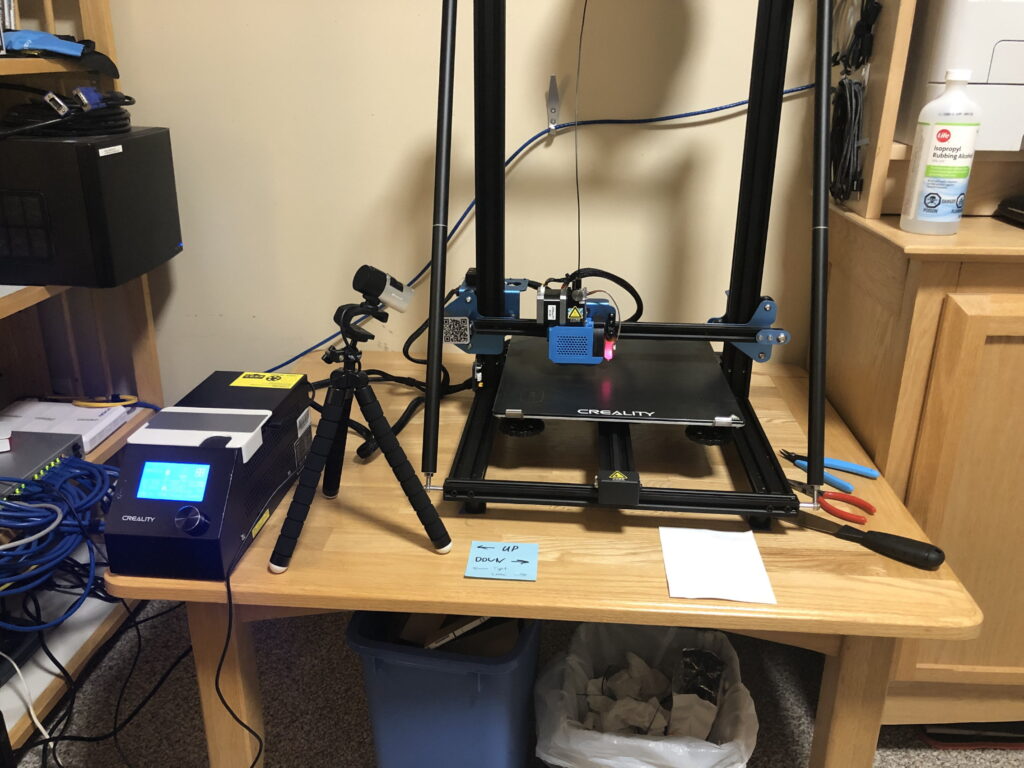 I added a BL Touch v3.1 to it and then, instead of using the Creality provided firmware based on Marlin 1.1.6 that still says “CR-10 V2” all over it, I built Marlin 2.0.6 for it with a lot of help from some friends.

Here are my configuration files and some pre-compiled firmware if you want to use it “as is” and not have to build your own: https://git.pickysysadmin.ca/FiZi/cr-10-v3-marlin-config

I’ve just completed a print and appears to have worked just fine so I think this firmware works. 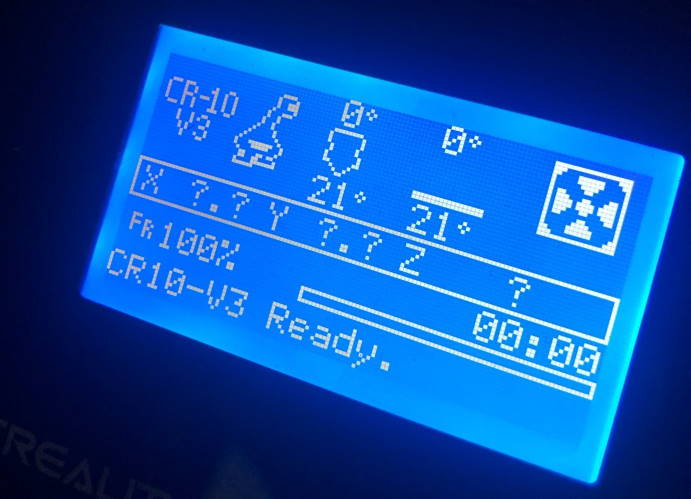 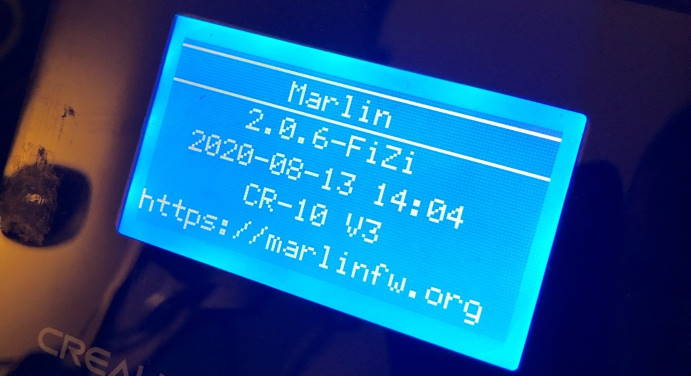 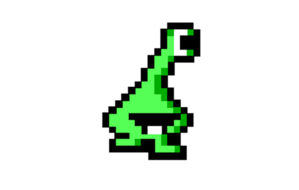