I’ve had the Purify App installed on my iOS devices since it was originally released and have recently been wondering if it still worked. The last version update for the App was 2018-09-21 which honestly is probably fine since blocking content in a web browser is probably a solved problem at this point and all that really matters is that the block list itself is being updated.

When you launch Purify on your device and click ‘Update Now’ it appears to be checking and pulling the latest block list right? I had assumed so.

Today I decided to check. I grabbed a copy of mitmproxy, installed it’s SSL certificate on a test device and started poking around. Here is what I found.

Either way you don’t need either value to view the contents of https://www.purify-app.com/app-services/latest-version which is just a text file named “latest-version” that contains a number (105 as of this writing).

The number 105 signifies the latest revision of the block list Purify uses. If you already have this version download the Purify App does nothing further.

Using mitmproxy I was able to intercept and alter the response from the web server so that it returned “106” instead of “105” which triggered the App into thinking there was a new block list to download. I then had what I was after which was the URL of the block list itself.

The 105 version of the block list can be found here: https://www.purify-app.com/app-services/blockerList.105.json

The Last-Modified response HTTP header contains a date and time when the origin server believes the resource was last modified.

This leads me to believe the block list for Purify hasn’t been updated since 2018-10-20 making the App fairly useless at this point despite likely still functioning.

Before publishing this blog post I reached out to the author for comment but heard nothing back after waiting a week.

If you’ve somehow stumbled across this blog post before purchasing Purify, I’d recommend spending your $1.99 elsewhere. It’s a little disappointing the developer hasn’t pulled the App from the store where it can still be purchased or published anything on the official Website or Twitter feed stating the block list is no longer being updated.

Do I have a recommendation for an alternative? Not an iOS App specifically. I use a PiHole personally.

It was time to upgrade my networking equipment in my homelab. I needed two 24p 1GB switches with 10GB uplinks to facilitate moving my homelab into my crawl space and out of my office. As things are configured right now I’d easily saturate a 1GB uplink between the switches and since I don’t have any 10GB in my homelab yet the CSS326 fits the bill. I am replacing a single first generation Ubiquiti 24p switch with two CSS-326-254G-2S+RM’s.

After receiving my CSS-326-254G-2S+RM’s I plugged them in to test them and verify my 10GB SFP+ transceivers were working properly. While I was doing that I also hooked them into PRTG using SNMP so see what kind of monitoring data I could pull from them. I had been optimistic that these new switches would run cooler than my Ubuiqiti but that does not seem to be the case. My Ubiquiti (which has a fan) runs at about 76c. The MikroTik ran at about 70c without a fan. An improvement but not a fantastic one.

Below is 1 hour of monitoring data from the MikroTik with a single 10GB SFP+ installed in it running idle but connected to my Ubiquiti via 1GBe and the other CSS-326 via fiber.

The CSS-326-254G-2S+RM has a mount for a 40mm fan and figured I’d just buy a fan and slap it in there. Unfortunately once I popped it open I saw there was no header to connect a fan to. I did some digging and came across this video which shows a significant temperature improvement once a fan is installed and the creator helpfully pointed out where you could tap into the switches board to get power. I also found this helpful forum post that also showed the J2 header and mentioned which connector was positive (+) and which was negative (-).

“YOU DON’T NEED TO DO THIS. Mine runs in a warm rack enclosure and has for 3 years now”

Using my multimeter I checked the J2 connector and it outputs 24v a few seconds after the switch boots up. From what I have read, the J2 only outputs power if you connect the included power cable to your CSS-326. If you use PoE to power the CSS-326 the J2 connector does not output any power. I did not test this but since I’m using the supplied power cables this isn’t a problem for me.

Noctua is my preferred fan manufacturer but they do not make a 24v 40mm fan which means I had to use a buck converter to drop 24v down to 12v for the Noctua NF-A4x20 I wanted to use. I will put a full parts list at the bottom of this blog post.

I did not solder to the J2 connector as my first step. I just want to show where it is before continuing. Please excuse my poor soldering skills. This is only my 3rd or 4th time seriously soldering something and my first time soldering to a PCB. Using the information I gathered, I am labelling which connectors I treated as positive (+) and negative (-). I might be wrong but it all worked in the end.

Easy step first, I mounted the fan into the CSS-326 using some M3x12mm screws, nuts and a little patience.

I then 3D printed a baffle to block off the dead space to the right of the fan if you’re looking at the switch from the front. The electrical tape is just to hold the baffle in place while I’m fiddling inside the switch. Once you put the top back on the baffle is firmly pinched in place and won’t move. As designed the baffle is overkill. It could be 3mm thinner but I don’t care about saving 6g of filament so I didn’t change it for the second switch. The STL is linked at the bottom of this post in the parts list.

Using the cables and adapters that came with the Noctua fan I was able to piece things together in a way that I would never need to touch the J2 connector again if something failed. The buck converter can be detached from the main feed connected to the J2 and the fan can be disconnected from the buck converter. If either piece ever dies it should be very simple to replace them. I specifically used the extension cable and the Y-splitter. You can toss the one labelled “Low-Noise Adapter” into your spare parts bin, we won’t be needing it.

I removed all of the sheathing from the cables, removed any blue/green wires because I only need the yellow and black ones and then cut off some of the connectors.

Piecing them all together they will look like this:

2 – Is the large connector on the extension cable that does NOT get removed. The IN on the buck connector will plug into this.

4 – Is the large connector on the lower leg of the Y-splitter that does NOT get removed. The fan will plug into this which is attached to the OUT on the buck connector.

6 – Is the fans connector, leave it alone. You will plug it into 4 when everything is done

Before soldering (1) to the J2 connector feed it through the gap in baffle and under the mainboard so you can keep it all tucked out of the way. If you don’t do this first you’ll have to remove the mainboard and baffle to do it later. There should be just enough wire to make it to the J2.

Solder it all together based on the diagram above and plug everything in except for the fan. We need to adjust the buck converter before we can plugin the fan. Odds are its default setting is too high (more than 12v) for our Noctua.

Disconnect the power from the switch, remove your multimeter and alligator clips, screw together the buck converter case and put the top back on the CSS-326. You’re done!

My final results were that the switch ended up running about 30c cooler and the SFP was 11c cooler.

I get MikroTik saving cost by not including a fan in the switch but I really wish they would have at least installed a connector on the J2 to make adding a fan an easy option.

I moved my entire homelab off my old Ubiquiti switch yesterday and have some real word temperatures with actual load on the switch:

Buck Converter – I used a “LM2596 DC-DC Buck Converter Step Down Module Power Supply DIP Output 1.25V-30V 3A”. There are a ton of these on Amazon. Here is a non-referral link to a 10pack I bought.

Noctua NF-A4x20 – Since there is plenty of room in the case I went with the 40mm * 20mm version of this fan to get the most air movement possible.

Buck Converter Case – I printed one of these to insulate the buck converter from the chassis of the switch.

Baffle – Completely optional but I designed and printed one of these to block off the section of the case to the right of the fan mount. Seemed pointless to circulate that air since there are no electronics in there except the buck converter.

Update 2021-12-18 – This looks like a much more competent script for detecting this vulnerability and there is a python version for Linux: https://github.com/CERTCC/CVE-2021-44228_scanner

Inspired by the one-liner here: https://gist.github.com/Neo23x0/e4c8b03ff8cdf1fa63b7d15db6e3860b#find-vulnerable-software-windows

I wrote a script to expand on the command, support Windows Server 2008 onward and to be more automated.

This script is basically the one liner with a bit of logic to get all the local fixed disks on a server and iterate through them all looking for Log4j jar file:

Sample output with nothing found:

Sample output with something found:

After installing OS updates on all of our servers in November 2021 we ended up with three servers, all running 2019 Core and all Domain Controllers, where the Windows Defender Advanced Threat Protection Service would not start.

With out the Windows Defender Advanced Threat Protection Service running these servers do not report to M365 ATP.

Manually trying to start the service results in an Error 1053: 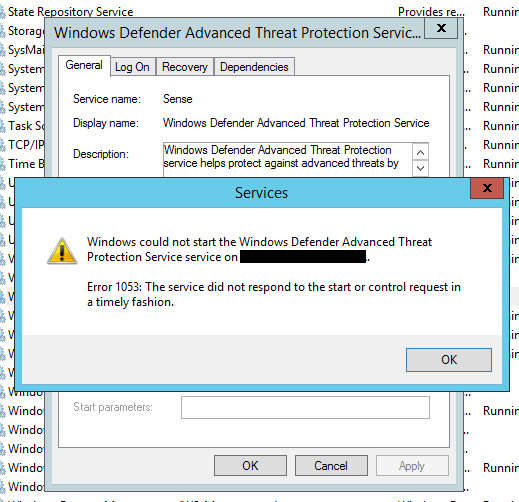 Hopefully this saves you a support ticket.

I suspect this issue is related to VMware screwing up USB support in ESXi 7.0 Update 2a. I suspect these threads are related

I found a quick workaround for my Homelab so I can get patched past Update 2a and hopefully not have to deal with this anymore:

Here is the error I got when trying to update:

I ran the following: esxcli storage core adapter rescan -a