I recently upgraded my Homelab (the thing that hosts this very blog) from a custom built server to a Dell T340. I have experience with the tower line of Dell servers from work and they’ve always been fairly quiet I’ve found once they’ve finished their power-on self-tests.

Not the case with the new T340. I did some testing with my iPhone and the dB Meter & Spectrum Analyzer App, holding it about 1 foot away from the front of the case, and got a average reading of ~52db-62db while the server wasn’t working very hard, in fact it was nearly idle. The ramping up and down of the fan is fairly annoying to, fair hairdryer like. 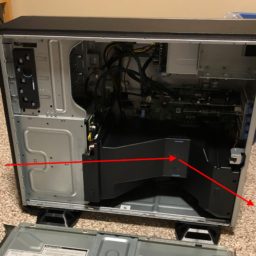 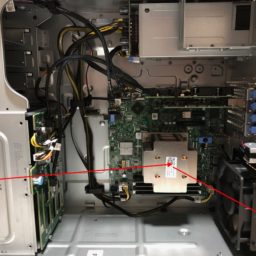 After looking up the fans model number I found out why it was so loud.

Since this server sits in my office at home I wanted to find a solution to this problem with out removing the OEM CPU heatsink.

After taking a few measurements I determined that a 96mm fan should fit nicely on the OEM CPU heatsink and any old 120mm fan will work to replace the case fan. I ended up purchasing the following:

One other problem with the T340. There is only a single on-motherboard connector for a fan and it’s a proprietary 5-pin connection and there are only two SATA power connections available so in addition to the fans I purchases:

With the above adapters I can connect the 120mm fan directly to the motherboard with PWM support which should keep the iDRAC (BMC) happy and adapt one of my SATA power connectors into two fan connectors in case I decided to install a 3rd fan (more on that later).

Replacing the 120mm is trivial. Release the bracket holding the current fan, disconnect the power cable, remove the OEM fan, install your replacement fan, connect the 4-pin -> 5-pin adapter, slide the fan back in place and connect it to the motherboard. 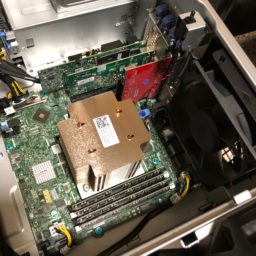 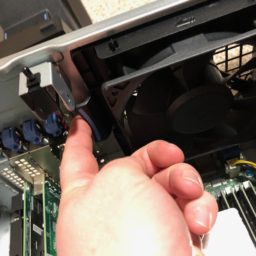 The fan is held in via rubber pegs, gently tug and the fan should come out 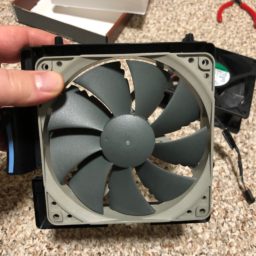 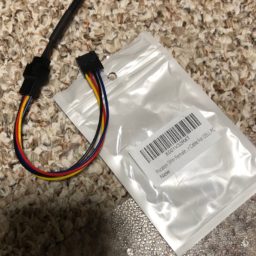 Connect the 4-pin to 5-pin adapter 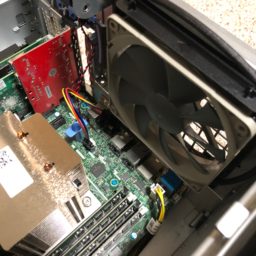 Re-install the fan and connect it to the motherboard

Next up is the CPU fan, this one is a bit more tricky since there are no screw mounts for it. I found this trick online: 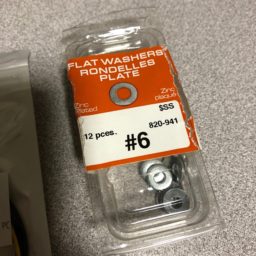 Take some metal washes that are small enough 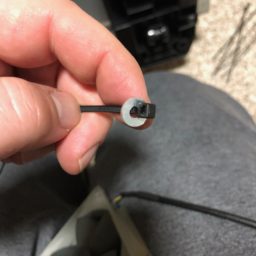 Feed a zap strap through them 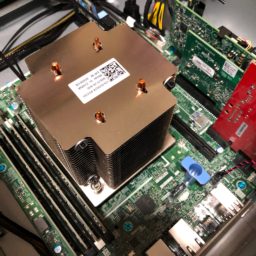 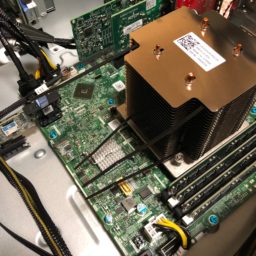 Instead I did the following for the bottom two fan mounting holes: 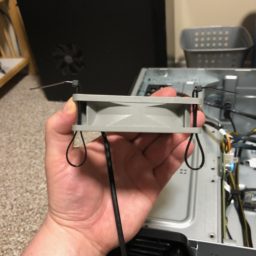 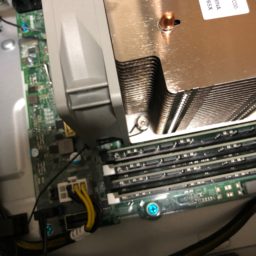 Finally I took two additional zap straps and fed their locking heads on to the top two straps on the fan and tightened everything up: 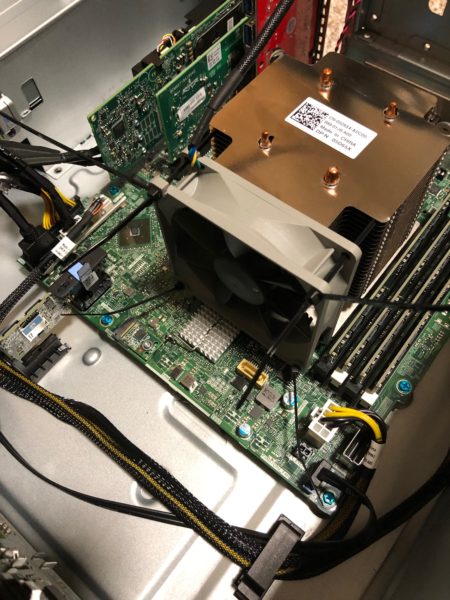 After verifying everything was snug and the fan fired up I snipped off the excess zap strap ends and re-installed the shroud over the CPU and powered everything back up.

My T340 is now nearly silent. I think the hard drives might be louder than the fans inside the case at this point.

Shortly after booting the system back up the iDRAC started complaining about the fan’s speed. The OEM fan is 6000RPM and the replacement fan is only 1700RPM. To address this I did the following:

Since making this change I haven’t received further fan speed warnings and I still can’t hear the fans.

Unfortunately I was not doing any kind of temperature logging with the OEM fan installed so I can’t comment on whether or not this has made the CPU temperatures higher or lower. If I were to guess I’d say the overall operating temperature has increased with the custom fans over the OEM fans.

I ran my server with the custom fans for about 24 hours before I got some logging configured.

Right after I configured temperature logging I shut down my server and installed one additional 140mm fan in the 5.25″ cage to suck fresh air into the case. I also removed the shroud thinking that cooling would be better with out it. 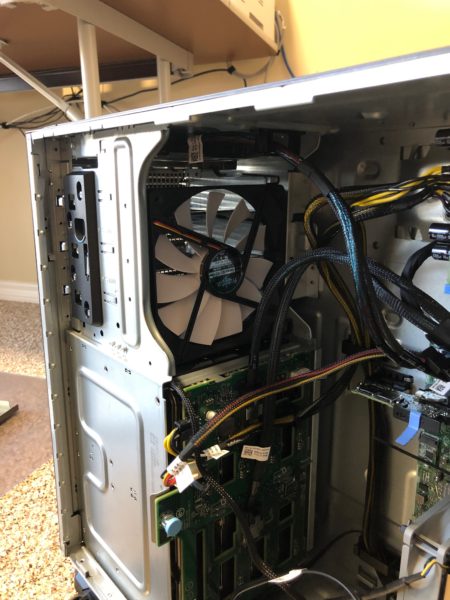 To get this 140mm fan to stay in place I used two small pieces of double sided duct tape.

Finally, here is the CPU temperature over the last 3 days:

Looks like my average temperature is 40c with spikes up to 55-60c. These numbers are within the Intel recommended maximum of 100c but I’m not liking these numbers.

Before I removed the shroud and installed the 140mm fan I did have some temperature readings:

I’m out of town right now but when I return I am going to re-install the shroud and run my server for a few days to see if the above remains true. I will update this post accordingly.

Here is 7 days of standard load on my server with the shroud installed. Doesn’t seem to make much of a difference. That being said, these temps are a little high for my comfort. I’m going to get a Noctua CPU heat sink the next time I have $150 lying around and will create a new post with it’s installation and operating temperatures.